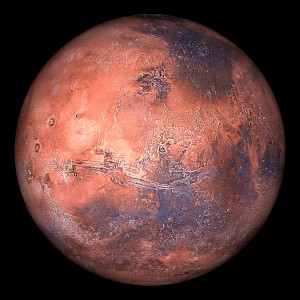 Dry ice may be the key to generating power for human colonies on Mars.

Ever since mankind landed on the moon, the public’s imagination has been gripped by the possibility of landing on Mars. It seems that we have never been closer to a manned mission to Mars, with current NASA plans envisioning a mission as early as the 2030s. If mankind is to build colonies on the planet, one of the biggest problems the astronauts will face is the challenge of generating power. One of the solutions being worked out involves dry ice, which is abundant and forms naturally on Mars. How is it possible?

On our planet, we create energy using what are called heat engines. Fuel is used to heat up water and this turns the liquid into a gas form. This steam is pressurized and fed into a turbine, which rotates and causes power to generate. It’s easy to do on Earth because water is abundant and temperature ranges on the planet lend to an easy process of changing it from liquid to gas form. But while water is also available on Mars, you would have to change its phase from solid to liquid and then to gas, using up too much energy in the cold environment to be practical.

Dry ice on Mars naturally exists close to its sublimation point (where it changes from solid to gas) so only a little bit of energy would be required to initiate the phase change. So how do we turn this into energy? One solution involves what’s called the Leidenfrost point. With water, this is a surface with a  temperature high enough where water is able to levitate on top of its own vapor. We can use the same effect with dry ice to produce a turbine with a temperature high enough to allow the solid carbon dioxide to float on its own vapor and create rotational motion. This would create an electrical generator that might be able to power a human colony on Mars!

Dry Ice Corp is the largest regional supplier of dry ice products and customized delivery services in the Northeastern United States, from Virginia all the way up to Maine. And because our dry ice is supplied by manufacturing plants located right here in the Northeast, we can guarantee freshness. Other suppliers, meanwhile, get their dry ice from manufacturing plants as much as 1,000 miles away, which has a direct impact on product freshness. Ready to get your dry ice? Click here!