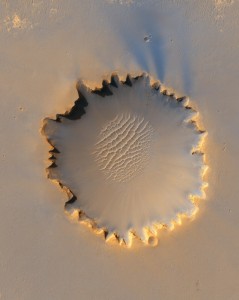 Dry ice occurs not only on the earth, but on Mars as well.

Dry ice is a commodity on Earth used in many ways. It is solid (frozen) carbon dioxide, and it keeps at a chilling -109.3 degrees Fahrenheit. However, instead of melting like regular ice, it turns directly from a solid into a gas, which is called sublimation. Manufacturers form dry ice by pressurizing the carbon dioxide naturally occurring in the earth into its solid form. This strange substance only has a limited time before it sublimates back into the atmosphere. Although Earth contains this common yet mysterious element, it is not the only planet that does. Mars, too, has carbon dioxide, showing up on its surface in an interesting way.

For countless years, people have dreamed of possible life on Mars. More exciting was the possibility that human beings could move there, and so the dream lives on. In fact, scientists have discovered actual water on Mars, which make up part of its polar ice caps. However, water is not the only ingredient. Frozen carbon dioxide creates part of the ice and snow. That’s right; dry ice naturally occurs on Mars!

Mars, like the earth, chills or heats up based on its relation to the sun. It too has seasons, growing colder in winter and warmer in summer. As mentioned, Mars also has ice caps, besides gullies that appear to have been created by water. The way the gullies are shaped is a lot like those on earth formed by rivers and floods. Dry ice, though, may be the cause.

As for the ice caps, a solid swathe of ice forms them. In the winter, dry ice rapidly collects over the poles and over the surface of the planet. Scientists at NASA also discovered in 2018 that snowfall exists on Mars, falling only at night but mainly sublimating before it hit the surface. In the spring, the dry ice remaining on the surface from the winter sublimates, tossing up the red sand dunes to unearth (un-mars?) the darker-colored sands beneath.

Just like weather on Mars can seem similar yet wildly alien compared to earth’s weather, so climate change can be measured on mars over time. Is dry ice remaining more in the atmosphere of Mars and less on its surface year-round? Observations seem to point in that direction.

Dry Ice For All Your Needs

Dry Ice Corp is the largest regional supplier of dry ice and related products in the Northeastern United States. Our dry ice is fresh and delivered right to your doorstep. We are happy to help you determine the best way to ship your goods, whether you have a huge amount of cookies or a single pie, and help you select the perfect amount of dry ice for the job. Give us a call at (201) 767-3200 or contact us online for a quote. To connect with us online, be sure to follow us on Facebook, Google+, Pinterest, and Twitter.